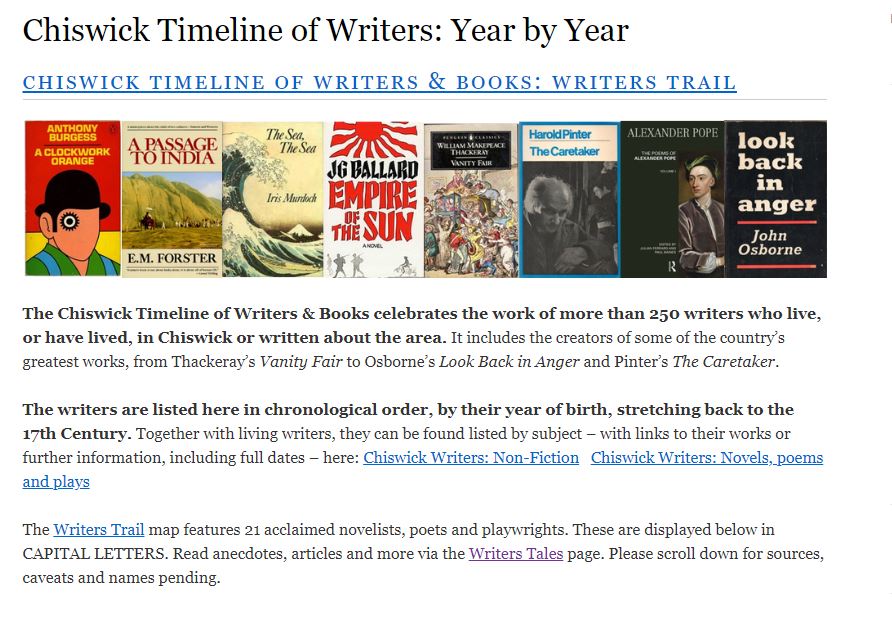 75 more writers who have lived in the London suburb of Chiswick W4, or written about the area have been entered on the Chiswick Timeline of Writers and Books, an online archive launched last autumn by the Chiswick Book Festival. It brings the total to 250 writers, from the 17th Century to the present day, with more pending as local residents suggest new names for inclusion. They are listed by year and by genre – non-fiction and novels, poems and plays.

They join distinguished writers and famous names already featured on the Chiswick Timeline and its Writers Trail map. These include Harold Pinter, who wrote The Caretaker in Chiswick; John Osborne, who submitted the manuscript of Look Back In Anger from his Chiswick houseboat; and William Makepeace Thackeray, who set the opening chapter of Vanity Fair in Chiswick Mall, where he went to school.

The Timeline has been compiled by the director of the Chiswick Book Festival, Torin Douglas. He said: “When we started the Festival, I wanted to celebrate the writers who have lived here, because I thought Chiswick’s record had been under-recognised. I knew there were distinguished writers with W4 connections, and famous residents who’d written their memoirs, as well as less well-known authors, poets and dramatists. But I never suspected we’d find 250 – or that so many of them would be quite so distinguished!”

The Festival is now challenging other book festivals, libraries and local history societies to come up with their own lists of writers. It follows a tweet from museums consultant Val Bott, former chairman of the William Hogarth Trust, which supports Hogarth’s House in Chiswick.

She tweeted: “Can other suburbs besides #Chiswick demonstrate this degree of #literarycreativity? Still finding more writers & you can help too: check the current list & send in missing names!”

The art critic and historian Marina Vaizey was one of the first to respond. She has lived in Chiswick for many years and revealed that her late husband John, the economist Lord Vaizey, had been responsible for the EM Forster blue plaque in Chiswick. Her story is included in a series of ten ‘Writers Tales’ in the archive. These include pages about Queen Victoria in Chiswick, as described in her Journals, and Georgiana, Duchess of Devonshire, who called Chiswick House her “earthly paradise”.

JG Ballard’s daughter, the artist Fay Ballard, recalled that her father loved walking in Chiswick House Gardens, illustrating it with her drawing of them there when she was a baby. Another resident gave new information about Alain-Fournier, the author of Le Grand Meaulnes, who wrote letters home from Chiswick when, at the age of 19, he worked as a translator at the Sanderson wallpaper company.

“We’ve been delighted with the response from local residents, who have given us names and Chiswick links we might never have thought of” said Torin Douglas. “We look forward to receiving more stories and we hope other places will take up the ‘Chiswick Challenge’ to identify their own writers and celebrate their literary heritage.”

My Type of Picture

ArtsEd Fringe Fest Play ‘Year 10’ to Perform at The Tabard!

Save & Accept
ArtsChiswick Timeline of Writers and Books Hits 250 Entries