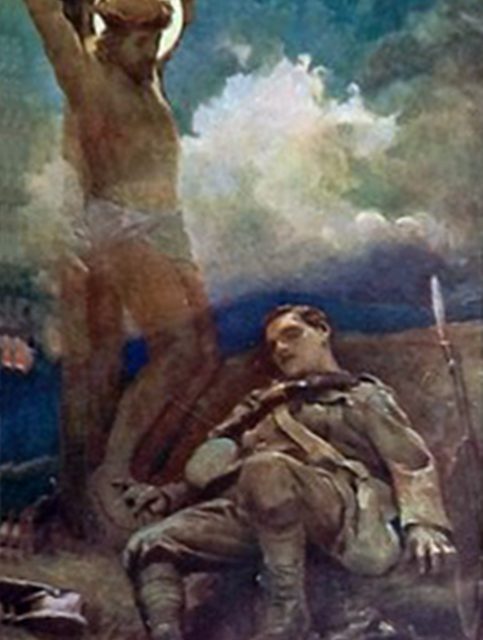 The forgotten story of two Bedford Park artists who created iconic World War One images is being highlighted this weekend by St Michael & All Angels Church, as it puts its Remembrance commemorations online because of the new lockdown rules. The church is encouraging people to join its 10am Remembrance Sunday service and keep the two-minute silence in their own homes.

The artist James Clark, who lived in Rusthall Avenue W4, rose to fame in 1915 when he painted The Great Sacrifice, which was described as “the most popular painting of the war”. His youngest son Captain Cosmo Clark MC saw action in France and documented the war in sketches and letters. Their stories are told this week in a new ‘Writers Tales’ entry on the Chiswick Timeline of Writers and Books: http://www.chiswickbookfestival.net/chiswick-timeline-writers-trail/james-cosmo-clark-ww1-paintings-letters/

The Great Sacrifice depicted a dead soldier in British uniform at the foot of a ghostly figure of Christ on the Cross. It became a popular print and was used as a war memorial in many public buildings and in stained-glass windows. Queen Mary, the wife of King George V, bought the original painting.

After the war, James Clark painted a large mural for St Michael & All Angels – The Salutation – which is displayed in the north aisle of the church. The full story is told at: James Clark, The Great Sacrifice and The Salutation. http://www.chiswickbookfestival.net/chiswick-timeline-writers-trail/james-cosmo-clark-ww1-paintings-letters/james-clark-great-sacrifice-salutation/

Cosmo Clark’s sketches and letters are published in a book called The Tin Trunk and form the basis of a play Cosmo’s War by former BBC producer Bernard Adams. The play was due to be performed this weekend in St Michael & All Angels Church but production was halted because of COVID-19. The full story is told at: The Tin Trunk: Letters and Drawings 1914-18. http://www.chiswickbookfestival.net/chiswick-timeline-writers-trail/james-cosmo-clark-ww1-paintings-letters/tin-trunk-letters-drawings-1914-1918/

Torin Douglas, director of the Chiswick Book Festival, said: “We were planning to tell the family’s story by staging Cosmo’s War in St Michael’s, where people can also see the James Clark mural. That became impossible but we can highlight James and Cosmo Clark’s achievements online, through The Tin Trunk and the Chiswick Timeline of Writers and Books.”

It includes the story of Chiswick’s Patricia Davies, who was awarded the Legion D’Honneur for her secret work in World War Two. Pat and her sister Jean recently published a book, The Codebreaking Sisters – Our Secret War, and spoke about their experiences in an interview for the Chiswick Book Festival, filmed at St Michael’s. The video can be seen on YouTube: https://www.youtube.com/watch?v=bwPq3WJNkWQ

St Michael’s is also remembering the 128 people named on its war memorials, each of whose stories is told on the church’s World War 1 Project website, supported by the National Lottery Heritage Fund. http://www.smaaawwi.org.uk/wwi/. Its Remembrance Sunday service this weekend will begin at 10am, live-streamed on its Facebook page, followed at 11am by the two-minute silence and Act of Remembrance. https://www.facebook.com/smaaaW4/

Fr Kevin Morris, the vicar of St Michael & All Angels, said: “Unfortunately, there will be no public act of worship for Remembrance Sunday, but I do encourage you to join us in your own homes to remember all who have died in war, by standing and keeping the two-minute silence. We have resumed our daily live-streamed worship, at 12 Noon on weekdays and 10am on Sundays – and the church is also allowed to be open each day for private prayer.” 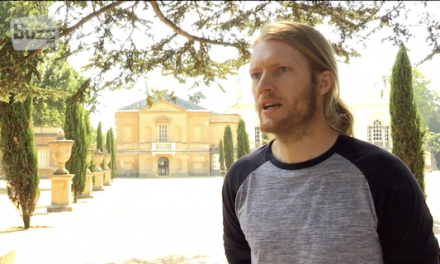