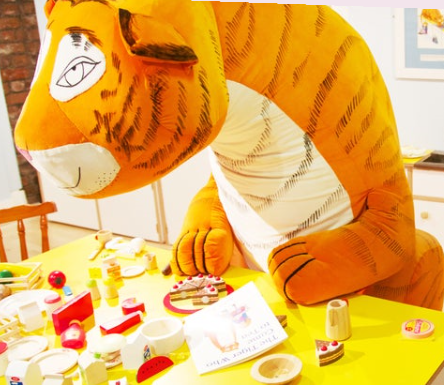 The Tiger Who Came to Tea 50th Anniversary Exhibition

The Tiger Who Came to Tea 50th Anniversary Exhibition

This special exhibition, originated by Seven Stories, The National Centre for Children’s Books, will bring the book alive for a new generation of audiences. Taking place from 11 January to 1 March 2020, the exhibition features displays of Judith Kerr’s illustrations and gives children the chance to step into Sophie’s kitchen to have tea with the tiger himself.

The Tiger Who Came to Tea began as a bedtime story for Judith Kerr’s own children and was published in 1968. It soon became a classic and by the time it celebrated its 40th anniversary in 2008, it had been translated into 11 languages and sold over five million copies.

As well as celebrating favourite stories, you’ll have the opportunity to explore Judith’s childhood and her experiences of having to escape Germany as Hitler came to power.

The exhibition gives a unique insight into Judith’s life and work, including access to childhood drawings where we discover how Judith developed into the artist and storyteller we know today.