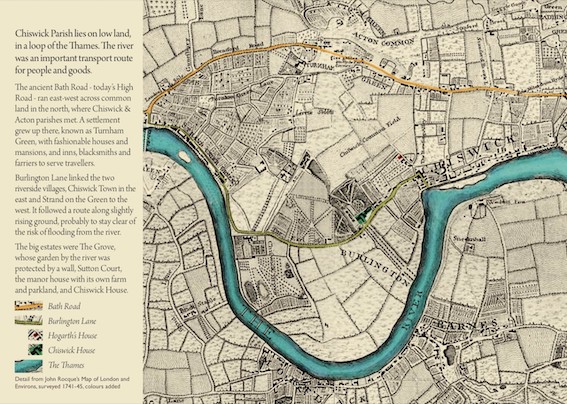 As the Government urges people to “stay local”, Chiswick cultural groups are encouraging people to explore their area’s heritage by following the local arts trails, online (if they’re staying at home) and on foot (if they’re taking daily exercise). The ‘Exploring Chiswick’ campaign will run for the next month online, in local media and on social media.

Chiswick has inspired – and been home to – artists and writers for 400 years, from William Hogarth, Alexander Pope & William Makepeace Thackeray to the Nobel Prize winners WB Yeats and Harold Pinter. Residents include the artist Sir Peter Blake and the current Sunday Times bestselling author Richard Osman.

Torin Douglas, director of the Chiswick Book Festival, says: “There are several inspiring and informative arts trails in Chiswick and these free guides are ‘oven-ready’, to download on mobiles and computers, or to pick up from local centres. We hope they will cheer Chiswick up and help improve people’s mental and physical well-being, whether shielding or taking daily exercise within Government guidelines.”

The campaign is backed by Abundance London, which created the Chiswick Timeline: A History of Art & Maps and its Art Trail; Brentford & Chiswick Local History Society and William Hogarth Trust, which co-created ‘In Georgian Footsteps’, a guided trail of 18th Century Chiswick; Chiswick House & Gardens Trust, which has its own interactive map and visitor guide; the Chiswick Book Festival, which created the Chiswick Timeline of Writers & Books and its Writers Trail; and by St Michael & All Angels Church, which runs the Chiswick Book Festival, the Bedford Park Festival and other community arts activities.

Val Bott, chairman of the William Hogarth Trust, says: “Our Georgian trail helps you step back into 18th century Chiswick and links Hogarth’s House and Chiswick House. It was a pleasing joint project between our Trust, Chiswick House & Gardens Trust and the Brentford & Chiswick Local History Society, funded by the John & Ruth Howard Trust and Hounslow Council. Try it out – and see a place you thought you knew through fresh eyes!”

Fr Kevin Morris, vicar of St Michael & All Angels, Bedford Park, says: “At St Michael’s we believe faith and the arts go together, to inspire people, lift their spirits and engender conversations with people across a wide range of backgrounds and beliefs. Bedford Park, the first garden suburb, was inspired by the Aesthetic Movement of the 1870s and has long been a centre for artists, architects and writers.”

Xanthe Arvanitakis, director of Chiswick House & Gardens Trust, said: “At Chiswick House we are committed to keeping the Gardens open, as they’re essential to everyone’s mental and physical wellbeing. We were thrilled to be awarded £308,000 from the Government’s Culture Recovery Fund, which will help us support the needs of local schools and communities – and we hope people will enjoy finding out more about our cultural heritage.”

The campaign leads into a series of online talks on ‘Thames Luminaries’, starting on January 27th with Val Bott on ‘Within the garden walls at Hogarth’s House’. On January 29th, Dr Marion Harney will speak about ‘Alexander Pope: the poet and poetic landscape’; and on February 3rd the topic is ‘Chiswick House, William Kent, and the birth of the English Landscape Movement‘ with John Watkins. The 10 talks are in aid of the Pope’s Grotto Preservation Trust and can be booked here: https://chiswickhouseandgardens.org.uk/event/the-thames-luminaries/

The Rat Pack Rock Out at St Michael & All Angels!

Wastwater By Simon Stephens Comes To The Tabard

Stephen Bowman From Blake & The Race For The Christmas Number 1!